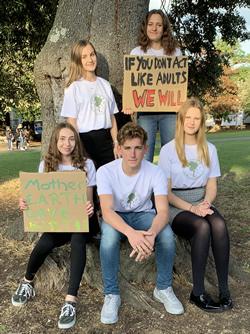 Greta Thunberg isn’t the only teenager to champion a message of direct environmental responsibility, with Georgia, Daisy, Jonah, Kathy and Aliya from Year 12 rallying to her call for social action.

The sixth form students spent their summer planning an environmental recycling and clean-up project close to their hearts under the auspices of the National Citizen Service.
Resonating strongly with Greta’ environmental wake up call, The Fab Five coordinated a beach litter picking campaign, walking between Broadstairs and Ramsgate along the coast, litter picking as they went with the rubbish collected going to recycling.
Well planned and carefully executed, the five used the campaign to promote their message of social responsibility and direct action whilst fundraising as they litter picked. The enterprising pupils raised £1000 which they donated to their chosen charities.
With an eye to longevity, the pupils have already made a commitment to further their environmental concerns by supporting other campaigns, both local and national.

All five have certainly lived up to Greta’s maxim that “No one is too small to make a difference”.